Lesson #174: Enriching Your Vocabulary With Synonyms: Reading from Radcliffe’s ‘The Mysteries of Udolpho’ 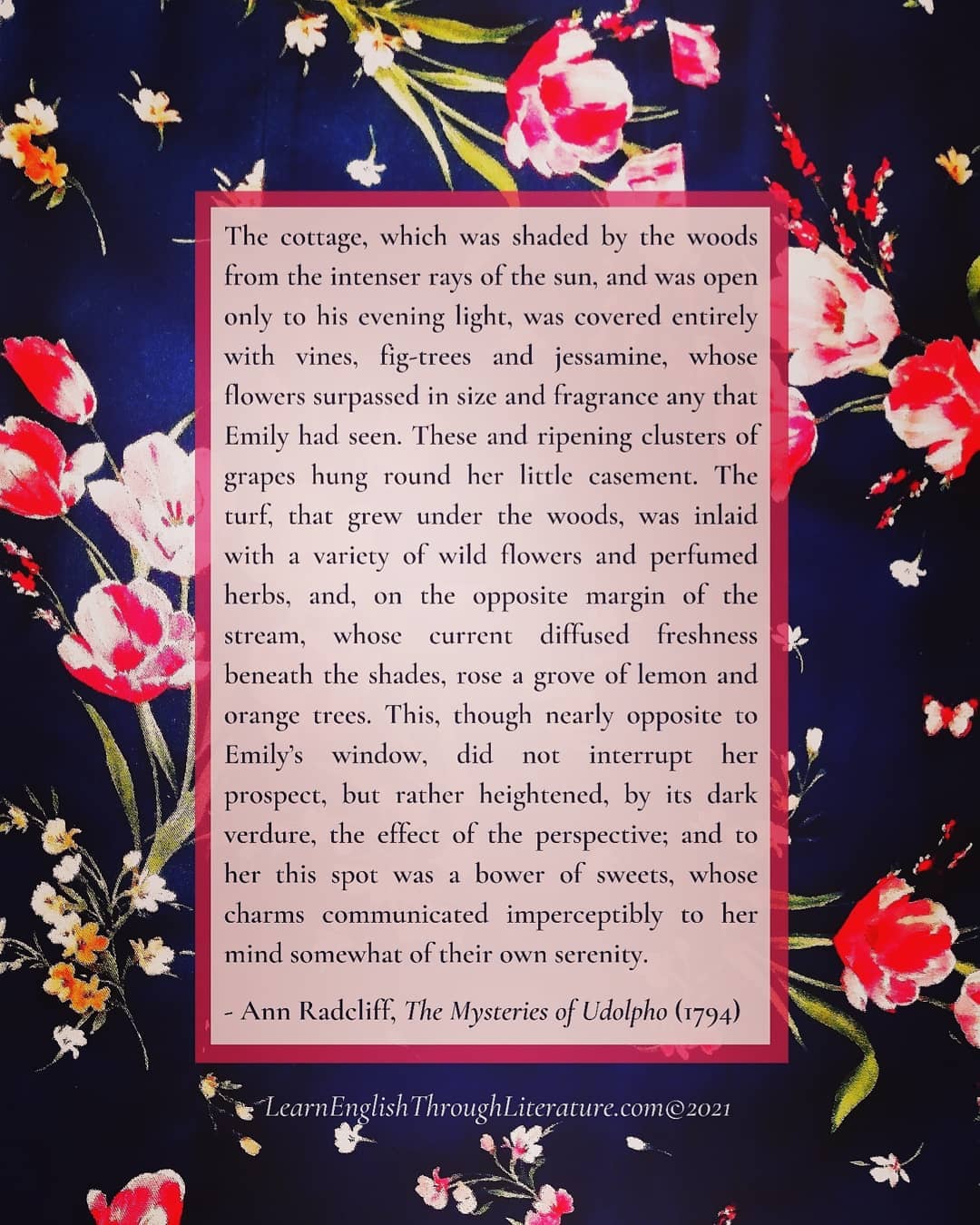 📚 If you are an intermediate or advanced level English language student, you have almost certainly been told that you should read more in English if you want to improve your command of the language.

One of the reasons this rings true is that reading (especially literature) exposes us to new or choice words that we might not otherwise find in common daily conversational English. Some of these introduce us to completely new concepts or ideas. Others show us synonyms of words we already know, and by doing so, our language is enriched greatly.

👉 This is in fact one of the key distinctions between students who can just communicate in English and students who are fluent in the language.

I know this is true from my own experience as a teenager, when I had to read many English classics and discovered new words that I, even as a native English speaker, didn’t know the meaning of. By the time I was preparing for my university entrance exams, I was able to score highly in English thanks to a store of varied synonyms in my vocabulary, all from reading and searching for the definitions of hundreds of words in dictionaries over the years! 📝

I want the same success for you, regardless of what level of English you currently have.

Don’t worry – you won’t need years to learn more vocabulary! We are going to be able to accomplish much more today in a short stretch of time thanks to the rich language of Ann Radcliffe’s classic, The Mysteries of Udolpho (1794). (Hint: if you have read Jane Austen’s Northanger Abbey before, you will probably remember that The Mysteries of Udolpho is mentioned in it as one of Catherine Morland’s favourites, a novel that leads her to imagine a very romaticised view of Northanger Abbey, with interesting results!)

Without further ado, here is a passage from The Mysteries of Udolpho, together with a list of helpful vocabulary and synonyms provided below.

📘 The cottage, which was shaded by the woods from the intenser rays of the sun, and was open only to his evening light, was covered entirely with vines, fig-trees and jessamine, whose flowers surpassed in size and fragrance any that Emily had seen. These and ripening clusters of grapes hung round her little casement. The turf, that grew under the woods, was inlaid with a variety of wild flowers and perfumed herbs, and, on the opposite margin of the stream, whose current diffused freshness beneath the shades, rose a grove of lemon and orange trees. This, though nearly opposite to Emily’s window, did not interrupt her prospect, but rather heightened, by its dark verdure, the effect of the perspective; and to her this spot was a bower of sweets, whose charms communicated imperceptibly to her mind somewhat of their own serenity.

– Ann Radcliffe, The Mysteries of Udolpho

cottage: a small house, usually in a rural setting. Traditionally for a small family living simply, a cottage can now mean a nice, quaint (old-fashioned) holiday home in the country. Synonyms might include: cabin, lodge, or simply small home.

woods: a group of trees. Synonyms might be forest, grove or copse. Both of these last words mean a small wood; ‘grove’ usually refers to a group of trees of the same kind, such as a ‘grove of apple trees’, while the trees in a ‘copse’ are usually wild, varied, and sometimes deciduous (losing their leaves in the autumn and winter).

intenser: This word is not common, and could have been constructed by Radcliffe for this story. It simply means ‘more intense’, which is the usual way that we would express this idea: ‘the cottage, which was shaded by the woods from the more intense rays of the sun …’

💡 By the way, Radcliffe’s choice of intense here is much more interesting than simply describing the sun’s rays as more bright or strong.

vines: a climbing or trailing branch of a grapevine (plant producing grapes)

fig-trees: trees that grow figs, a sweet fruit with small seeds in a dark centre that is eaten either fresh or dried. It grows in warm climates.

jessamine: a type of jasmine flower

fragrance: beautiful smell. This is a nice elegant word to use, and some synonyms of it might include: aroma, scent, perfume.

clusters: small groups, 1) such as hanging or drooping groups of flowers or fruits, or else 2) small groups of people. Synonyms of ‘cluster’ in its first sense include: bunch, batch, group of, collection, or bundle.

casement: a window that opens on a vertical hinge, like a door. A synonym might be window, although of course this denotes something more general than a casement.

turf: grass, soil, ground. This is a poetic way of describing it, and synonyms include: grass, lawn, soil, sod, or even peat.

inlaid: from verb ‘to inlay’, meaning to decorate an object with pieces of another material, which is often glossed over with varnish. Possible synonyms include: decorated, embellished, ornamented, adorned, garnished, finished, furbished, gilded (if it includes a coating of gold).

diffused: spread in an airy or light-handed way, such as through spray or steam. Synonyms include: dispersed, sprinkled, disseminated, distributed.

freshness: the quality of being fresh. Synonyms include; vigor, bloom, vibrancy, greeness, glow.

✍️ Note that not all the synonyms offered here are directly interchangeable with the words Radcliffe chose; some synonyms would better suit another sentence or context than hers, and yet they are very closely related in meaning to her words.

I am sure that there were words that I listed that either you already knew or at least had heard mentioned somewhere before, and in reading the definitions you were probably able to confirm or rephrase your understanding of those same words.

If not, perhaps today is your chance to familiarise yourself with these words!

Word by word, your vocabulary store is gradually growing, like a house being built brick by brick. Small beginnings to a successful journey ahead! ✨