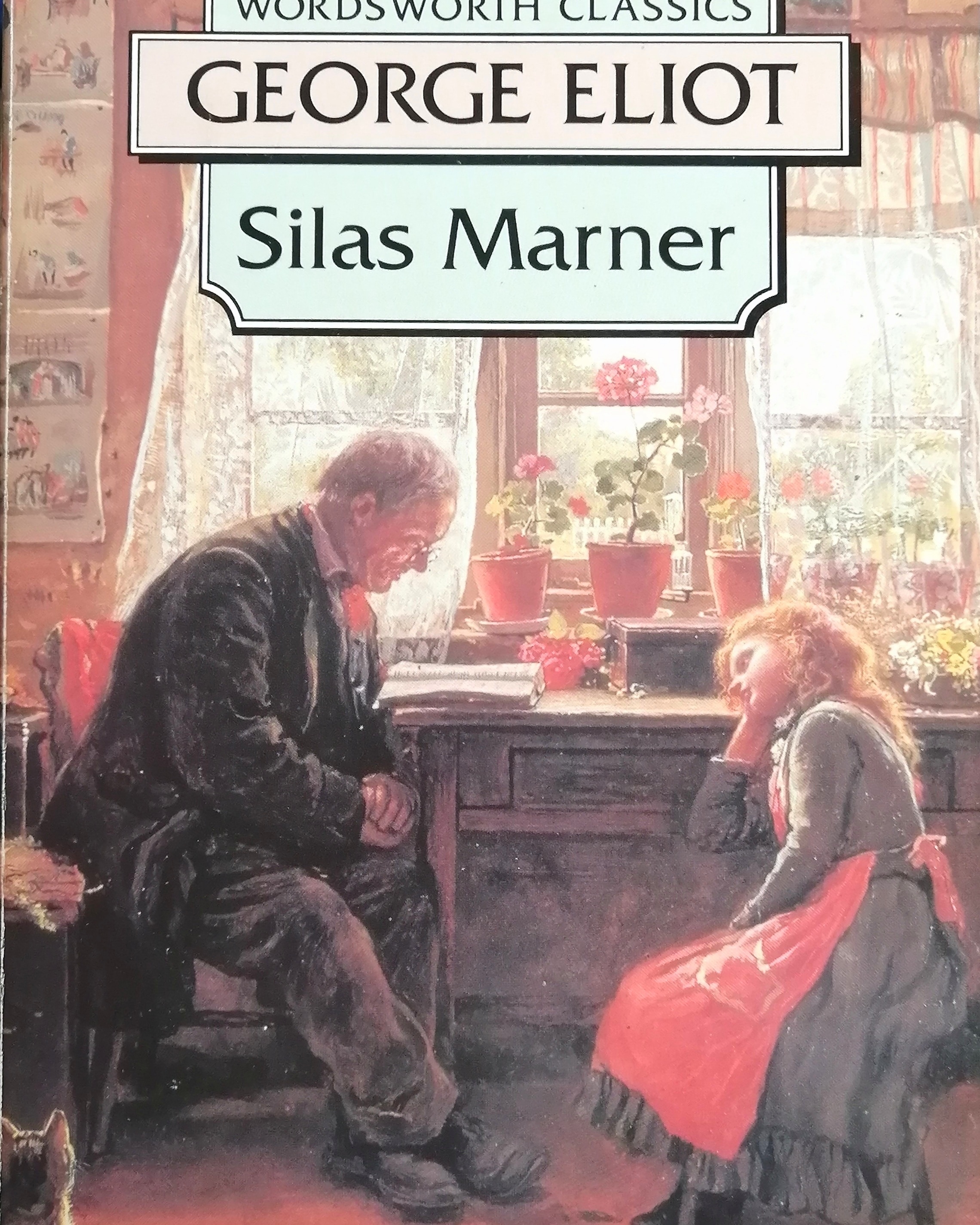 📙 ‘Ah, you’re fine and strong, arn’t you?’ said Silas, while Eppie shool her aching arms and laughed. ‘Come, come, let us go and sit down on the bank against the stile there, and have no more lifting. You might hurt yourself, child. You’d need have somebody to work for you – and my arm isn’t over strong.’

One verb that is both very commonly used in English and also often misunderstood by English language learners is the verb ‘to let’. Perhaps you have seen posters with ‘to let’ on them, meaning simply that a room or house is being advertised as available to rent. However, ‘let’ has a wide variety of different usages, some of which are very common in spoken English, and so today’s lesson focuses on highlighting 3 of these through George Eliot’s beautiful story, Silas Marner (1861).

📚 This novel is about an elderly man who was once wrongly accused of a minor crime; at the time of the story, he has long been ostracised (isolated) by many people in his neighbourhood, living alone for many years. All of a sudden, a child called Eppie enters his life, and everything changes for him. This story is about the power of human fellowship to strengthen and transform a lonely person’s life.

‘Let’ has the basic meaning of ‘to allow’ as in the following sentences from Silas Marner:

📙 … Miss Priscilla Lammeter was resisting her sister’s arguments, that it would be better to take tea at the Red House, and let her father have a long nap, than drive home to the Warrens so soon after dinner. – George Eliot, Silas Marner

📙 Moreover, it was quite plain he had no real love for her, else he would not let people have that to say of him which they did say. – George Eliot, Silas Marner

✍️ Notice how if we wanted to substitute ‘to allow’ or ‘to permit’ in the place of ‘let’ in each of the above sentences, we would need to change the next verb after it to an infinitive form, like this:

– … else he would not permit people to have that to say of him which they did say.

📝 #2 ‘LET’ – USING THE IMPERATIVE FORM WITH OTHER VERBS

In English we often use ‘let’ in the imperative form, as illustrated by some of the sample sentences above.

✍️ But one more unusual aspect about the imperative form of ‘let’ is that it is often used in the first person, singular and plural, which other verbs do not use.

In fact, ‘let’ enables other verbs to assume a first person imperative form. For example, again citing from Silas Marner:

📙 ‘So come and let me put my bonnet on, and there’ll be time for us to walk round the garden while the horse is being put in.’   – George Eliot, Silas Marner

📙 ‘Come, come, let me carry your prayer-book, else you’ll be dropping it, jumping i’ that way.’   – George Eliot, Silas Marner

📙 ‘Come, come, let us go and sit down on the bank against the stile there, and have no more lifiting. …’ – George Eliot, Silas Marner

📙 ‘Well, then, let me make the offer for you, that’s all, if you haven’t the pluck to do it yourself. …’ – George Eliot, Silas Marner

Notice the common shortened version of ‘let us’ – ‘let’s’:

📙 ‘Hold your tongue, Jem, and let’s hear what he’s got to say,’ said their landlord. – George Eliot, Silas Marner

Side observation: 💡 If you have ever listened to Handel’s Messiah, you have already heard an instance of the imperative form let: ‘Let us break their bonds asunder’ (which you can find on YouTube here). 🎵

While ‘let’ is a very flexible verb that is adopted by many other verbs to create an imperative in the first person (as shown above), there are several fixed word combinations using ‘let’ that are worth knowing about.

This is an informal way of saying ‘to inform [someone] of [something]. For example,

📙 Mr Macey, for example, coming one evening expressly to let Silas know that recent events had given him the advantage of standing more favourably in the opinion of a man whose judgment was not formed lightly, opened the conversation … – George Eliot, Silas Marner

📙 ‘You’ll let me know if I can be of any use, Kimble,’ said Mr Crackenthorp. – George Eliot, Silas Marner

📙 ‘Things look dim to old folks: they’d need have some young eyes about ’em, to let ’em know the world’s the same as it used to be.’ – George Eliot, Silas Marner

When used as an independent sentence, it simply means that you are going to consider something. Perhaps a student asks a teacher for help, and the teacher responds with, ‘Of course! Now, let me see …’

📙 ‘Well – stay – let me see,’ said Mr Snell, like a docile clairvoyante, who would really not make a mistake if she could help it. – George Eliot, Silas Marner

In the next sentence, we are told what is going to be seen: the night sky or weather conditions.

📙 ‘Let us see how the night is, though,’ said the landlord, who also considered himself personally concerned in the preposition. – George Eliot, Silas Marner

This example sums it up: to ‘let [something] go’ is to be prepared to part with something, to leave it behind, to break up with something (especially something stressful, painful or sad). In English we often use this phrase in the context of describing someone who is grieving: ‘She had lost her child more than ten years before and yet she was still grieving – she couldn’t let it go’. This means that she couldn’t release the grief of her past loss. Or you could say to someone who is stressed: ‘Try to let it go’, meaning, try to release the stress and relax.

Whenever you hear the construction ‘let [someone] go’, it can either mean releasing a person from a commitment such as a relationship (e.g., ‘She knew it was time to let her boyfriend go’) or a job (e.g., ‘During the recession, the manager was forced to let his staff go’ – that is, the staff lost their jobs, were made redundant, effectively fired because of the situation rather than any shortcoming of their own).

This little phrase has been made famous by John Lennon’s song by the same title. But it is a very handy phrase that is often used when we are in a situation that requires a concession of some kind – perhaps two people both want something, and one of them decides to give into the wishes of another by ‘letting it be’.

📙 ‘I’ll say no more. Let it be as you will. Speak to the child. I’ll hinder nothing.’ – George Eliot, Silas Marner

Another way we use ‘let it be’ is to choose a peaceful and passive option in a tense situation. In the sentence below, Godfrey is saying that instead of investigating a troublesome situation further, he would like to keep quiet about it and not disturb anyone further. A synonymous phrase could be to ‘let it rest’ or ‘let the matter rest’ – in other words, not to take action that would disturb anyone or disrupt the peace.

One of the great things about learning English through literature is that we are able to see how certain words, phrases, or constructions are used in context. As this lesson’s selected passages from Silas Marner have shown, ‘let’ is a verb that widely used in spoken English.

It is also used from time to time in written English, generally in its sense of ‘allow’ or ‘permit’, as can be seen in our bonus passage below.

I have not commented on this passage because now is your chance to practice what you have learned above!

👉 How many instances of ‘let’ can you find here? And if you were to substitute each one with an ‘allow’ or ‘permit’, can you see where you would place the additional ‘to’?

📙 … Let even a polished man of these days get into a position he is ashamed to avow, and his mind will be bent on all the possible issues that may deliver him from the calculable results of that position. Let him live outside his income, or shirk the resolute honest work that brings wages, and he will presently find himself dreaming of a possible benefactor, a possible simpleton who may be cajoled into using his interest, a possible state of mind in some possible person not yet forthcoming. Let him neglect the responsibilities of his office, and he will inevitably anchor himself on the chance that the thing left undone may turn out not to be of the supposed importance. Let him betray his friend’s confidence, and he will adore that same cunning complexity called Chance, which gives him the hope that his friend will never know. Let him forsake a decent craft that he may pursue the gentilities of a profession to which nature never called him, and his religion will infallibly be the worship of blessed Chance, which he will believe in as the mighty creator of success. The evil principle deprecated in that religion is the orderly sequence by which the seed brings forth a crop after its kind.