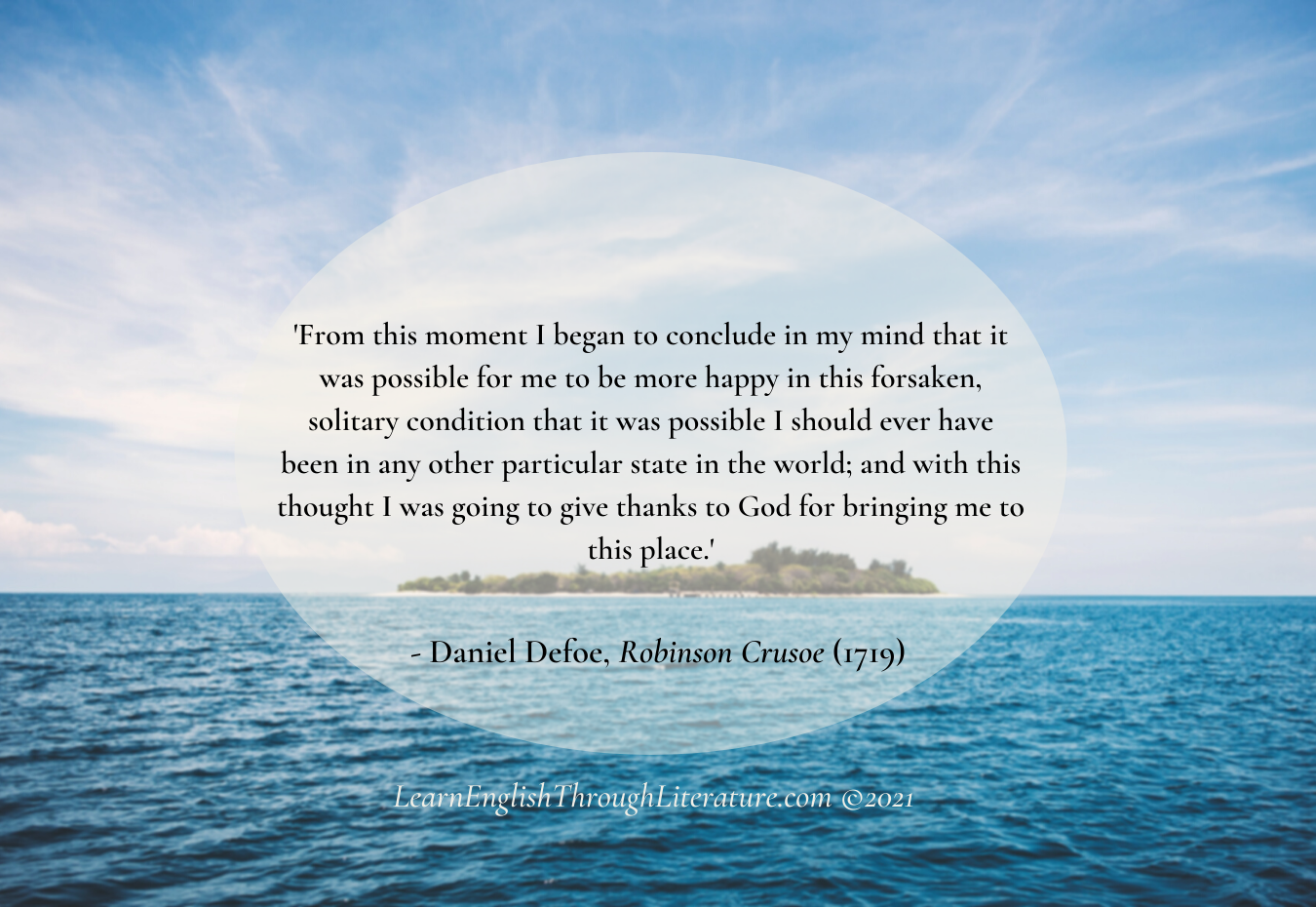 🏝️ Robinson Crusoe (1719) has been widely acknowledged as the first novel ever written in English. Many of us, whether or not we grew up in an English-speaking culture, are long familiar with the storyline of Robinson Crusoe – an Englishman who gets shipwrecked (the ship is sunk by a storm at sea) and ends up on a desert island, where he lives alone for several years. It is an idea that has shaped many cultural discussions, such as the ‘Desert Island Discs’ episodes on BBC Radio 4 where the presenter asks the interviewed person: ‘What would you bring to a desert island if you were ever stranded (stuck without help) on one?’

I am very fond of the original story of Robinson Crusoe and recommend that you read it at some point in your language learning journey. It describes how human character is shaped and strengthened through adversity in a very realistic way.

📆 One of the greatest challenges Crusoe deals with is managing his loneliness over a long time, with little happening in the meantime (in between) to cheer him or encourage him in any way. He tries to appreciate the passage of time through accurately describing small incidents that happened while on the island.

👉 For this reason, in today’s lesson we will be looking at some of the words and phrases (about 12 in total) under 4 categories that he made use of to distinguish one event from another, and which you too will be able to use in your own conversations.

When you are describing things that happened one after another, you can use the following common phrases, as does Daniel Defoe: ‘in the first place’, ‘afterwards’ for something that follows something else, and of course ‘lastly’ for the final part of the sequence.

📘 ‘In the first place, I was removed from all the wickedness of the world here; I had neither the lusts of the flesh, the lusts of the eye, nor the pride of life. I had nothing to covet, for I had all that I was now capable of enjoying …’

📘 ‘I went down afterwards into Yorkshire; but my father was dead, and my mother and all the family extinct, except that I found two sisters, and two of the children of one of my brothers; and as I had been long ago given over for dead, there had been no provision made for me; so that, in a word, I found nothing to relieve or assist me; and that the little money I had would not do much for me as to settling in the world.

📘 ‘Lastly, I wrote to my partner, acknowledging his industry in the improving the plantation, and his integrity in increasing the stock of the works …’

✍️ NOTE: Synonyms of ‘in the first place’ include ‘firstly’, ‘at first’, ‘first of all’; some synonyms of ‘afterwards’ include ‘later’, ‘after’, and ‘thereafter’ (at the start or end of a phrase only). Other words or phrases you could use instead of ‘lastly’ include: ‘finally’, ‘at last’, ‘after all’, ‘ultimately’, and ‘in conclusion’.

These words indicate that some action or behaviour was ongoing for a period of time, even if only for a limited time.

📘 ‘How frequently, in the course of our lives, the evil which in itself we seek most to shun, and which, when we are fallen into, is the most dreadful to us, is oftentimes the very means or door of our deliverance, by which alone we can be raised again from the affliction we are fallen into.’

📘 I cannot explain, by any possible energy of words, what a strange longing I felt in my soul upon this sight, breaking out sometimes thus: “Oh that there had been but one or two, nay, or but one soul saved out of this ship, to have escaped to me, that I might but have had one companion, one fellow-creature, to have spoken to me and to have conversed with!” In all the time of my solitary life I never felt so earnest, so strong a desire after the society of my fellow-creatures, or so deep a regret at the want of it.

📘 ‘Yet all this while I lived uncomfortably, by reason of the constant apprehensions of their coming upon me by surprise: from whence I observe, that the expectation of evil is more bitter than the suffering, especially if there is no room to shake off that expectation or those apprehensions.’

📘 Nay, I was coming into the very middle station, or upper degree of low life, which my father advised me to before, and which, if I resolved to go on with, I might as well have stayed at home, and never have fatigued myself in the world as I had done; and I used often to say to myself, I could have done this as well in England, among my friends, as have gone five thousand miles off to do it among strangers and savages, in a wilderness, and at such a distance as never to hear from any part of the world that had the least knowledge of me.

📝 #3 DESCRIBING CAUSE AND EFFECT SEQUENCES

As the title says, these following words only make sense when they are fully dependent on the existence of a previous clause or condition.

📘 ‘Then I called a council— that is to say in my thoughts— whether I should take back the raft; but this appeared impracticable: so I resolved to go as before, when the tide was down; and I did so, only that I stripped before I went from my hut, having nothing on but my chequered shirt, a pair of linen drawers, and a pair of pumps on my feet.’

📘 ‘Thus, we never see the true state of our condition till it is illustrated to us by its contraries, nor know how to value what we enjoy, but by the want of it.

📘 I have since often observed, how incongruous and irrational the common temper of mankind is, especially of youth, to that reason which ought to guide them in such cases— viz. that they are not ashamed to sin, and yet are ashamed to repent; not ashamed of the action for which they ought justly to be esteemed fools, but are ashamed of the returning, which only can make them be esteemed wise men.

What words should you use to talk about an exact moment or day? Here are a few for you from Robinson Crusoe, with their synonyms:

📘 ‘It happened one day, about noon, going towards my boat, I was exceedingly surprised with the print of a man’s naked foot on the shore, which was very plain to be seen on the sand. I stood like one thunderstruck, or as if I had seen an apparition.’

📘 ‘From this moment I began to conclude in my mind that it was possible for me to be more happy in this forsaken, solitary condition than it was probable I should ever have been in any other particular state in the world; and with this thought I was going to give thanks to God for bringing me to this place.’

✍️ NOTE: Synonyms of ‘it happened one day’ include: ‘once’, ‘once upon a time’, ‘erstwhile’, ‘on one occasion’ – all of these expressions are used to tell a story. Synonyms of ‘from this moment’ include: ‘from that time onward’, ‘after that’, ‘thereafter’, ‘thenceforth’, ‘forever after’, ‘from there on’, ‘thenceforward’, ‘following that time/day’.

You have reached the end of the lesson, but of course there are many more words that you could add to this lesson’s topic: words like therefore, next, regularly, thereafter, oftentimes, as a result, etc.

💡 However, as long as today’s lesson has made you more aware of such words, I am sure that you will notice them all the more from now on and appropriate (adopt) them in your own speaking and writing. If you would ever like a lesson with me to double-check that you are using them correctly, feel free to contact me via one of the contact forms on the home page – I will be happy to help you at whatever level you are at!