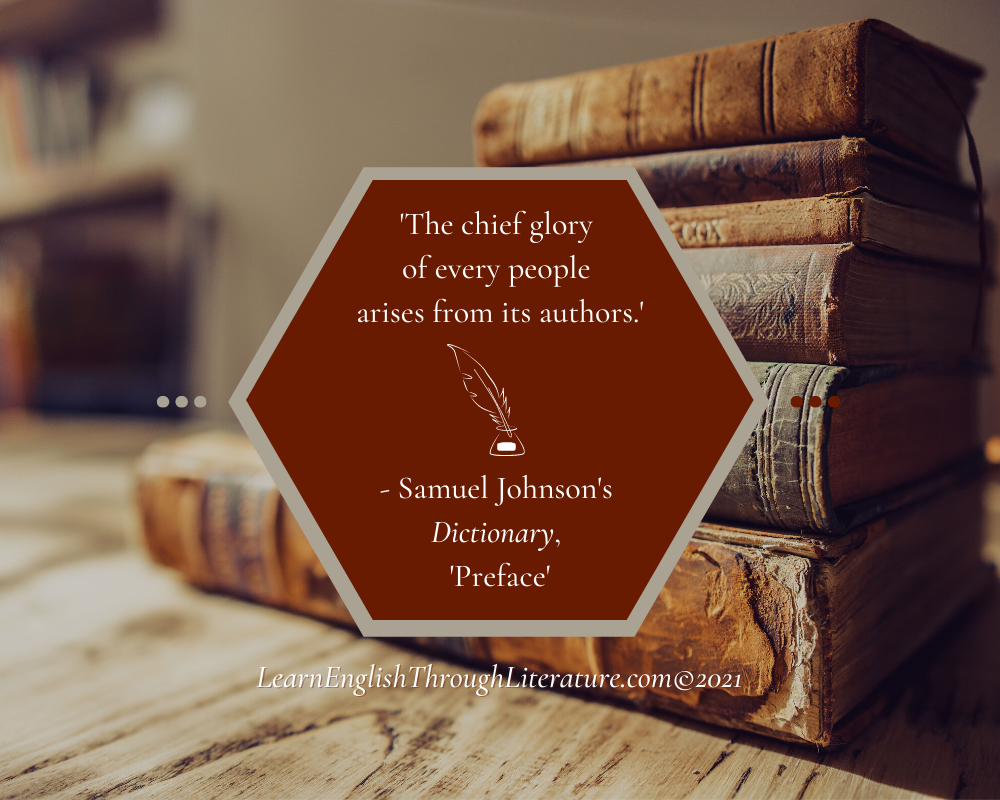 If every English language student has one book in common, it is almost certainly an English dictionary!

The question would be: which one to choose? 📚

There are so many nowadays, but if we could travel back a few hundred years or so, we would be lucky to find a copy of one.

I am talking about the mid-1700s, when books were still very expensive to buy in Britain, and there was in fact no dictionary readily available anywhere.

🕯️ Yet in a small garret (attic) in the middle of London, one man and his team of amanuenses (individuals who copied out texts by hand) were working hard on one. 🖋️

It would eventually become known as the great Johnson’s Dictionary (1755), and would have a lasting influence on the English language, being the only popular dictionary until the Oxford English Dictionary (itself greatly influenced by it) was published over a hundred years later in 1884.

About half a century after Johnson’s dictionary was published in London, and across the Atlantic ocean in the newly-independent U.S.A., another lexicographer (dictionary writer) was hard at work creating his own dictionary – one that he hoped would reflect a new version of English for the Americas. His name was Noah Webster, and you may even have a ‘Webster’ (or ‘Merriam-Webster’) dictionary of your own.

I thought it would be nice in today’s Mini-Lesson Monday to have a look at some of the history and contributions of each of these two seminal (hugely important and influential) dictionaries: Johnson’s and Webster’s. We will also cover some of the key differences here between British and American spellings that are largely derived from these two key books.

‘The chief glory of every people arises from its authors.’

When Samuel Johnson was first approached by a group of booksellers to write a dictionary of the English language, he decided not to treat it as an elaborate kind of word list. Instead, he decided to take three years (in the end it was closer to nine years) to read the greatest amount of books in English literature from the past 200 years, gathering every reference that English authors had ever made to each single word and listing their meanings instead.

So for example, he wrote his definition of ‘citizen’ as follows:

All inhabitants within these walls are not properly citizens, but only such as are called freemen.

– RALEIGH’S HISTORY OF THE WORLD

2. A townsman; a man of trade; not a gentleman.

3. An inhabitant; a dweller in any place.

And one more citizen to Sybil gives.

📙 CITIZEN. adj. [This is only in Shakespeare.] Having the qualities of a citizen; as cowardice, meanness.

But not so citizen a wanton, as

To seem to die ere sick.

As you can imagine, it took him many years and the help of several amanuenses to help him complete this monumental task.

✍️ He captured typical instances of British spelling that reflect its Norman French influences: words like ‘honour’, ‘colour’, ‘axe’, and ‘centre’, which include the silent ‘e’ and ‘u’ letters that were later excluded in American spelling.

His definition of some words took up a lot of space – ‘take’ has 134 definitions, each one illustrated by its own quotation.

👉 Johnson’s dictionary had several shortcomings however.

His etymologies (the histories of words, showing their origins) were not as detailed as are the entries found in modern dictionaries.

He also did not offer much guidance on how to pronounce different words. He kept many of the older spellings in English with extra letters that are not pronounced and were already falling into obscurity (not being used) even in his time – letters such as the ‘k’ at the end of words like ‘magick’ and ‘musick’.

What is more, his approach to writing the dictionary was at first prescriptive rather than descriptive. This means that while contemporary (modern) lexicographers (dictionary writers) try to describe how language is used, a prescriptivist tends to try and guide readers on how to correctly pronounce or define a word, according to high standards, even if most speakers do not actually use language in that way.

Johnson realised his difficulties with this approach about half-way through the project, and nearly gave up. He realised that his prescriptive view couldn’t capture everything; words do not always stand for concrete things that are easily definable, but also for ideas that are difficult to catch (evasive) and a bit ‘airy’ (nebulous, like a cloud). Some words, like justice, are best expressed through illustrations rather than definitions and statements. It was in this sense that his method made sense over time, drawing on great literary quotations to establish and explain ideas in all their different forms.

💡 Lastly, the dictionary helped to turn Shakespeare into a key foundation in English literature.

Before Johnson’s Dictionary, Shakespeare had been seen as a good playwright whose plays could be readily rearranged and reinterpreted by anyone with experience in acting or playwriting. Through his Dictionary, Johnson presented Shakespeare’s writings with more gravity so that readers came to appreciate Shakespeare as a great dramatist who deserved more attention and respect.

All in all, Johnson’s Dictionary was an incredible accomplishment. It was a direct precursor to the Oxford English Dictionary (1884) and impacted the writing of many subsequent (following into the future) dictionaries, including American Noah Webster’s 1828 dictionary, which we will consider in Part 2 of today’s Mini-Lesson Monday.