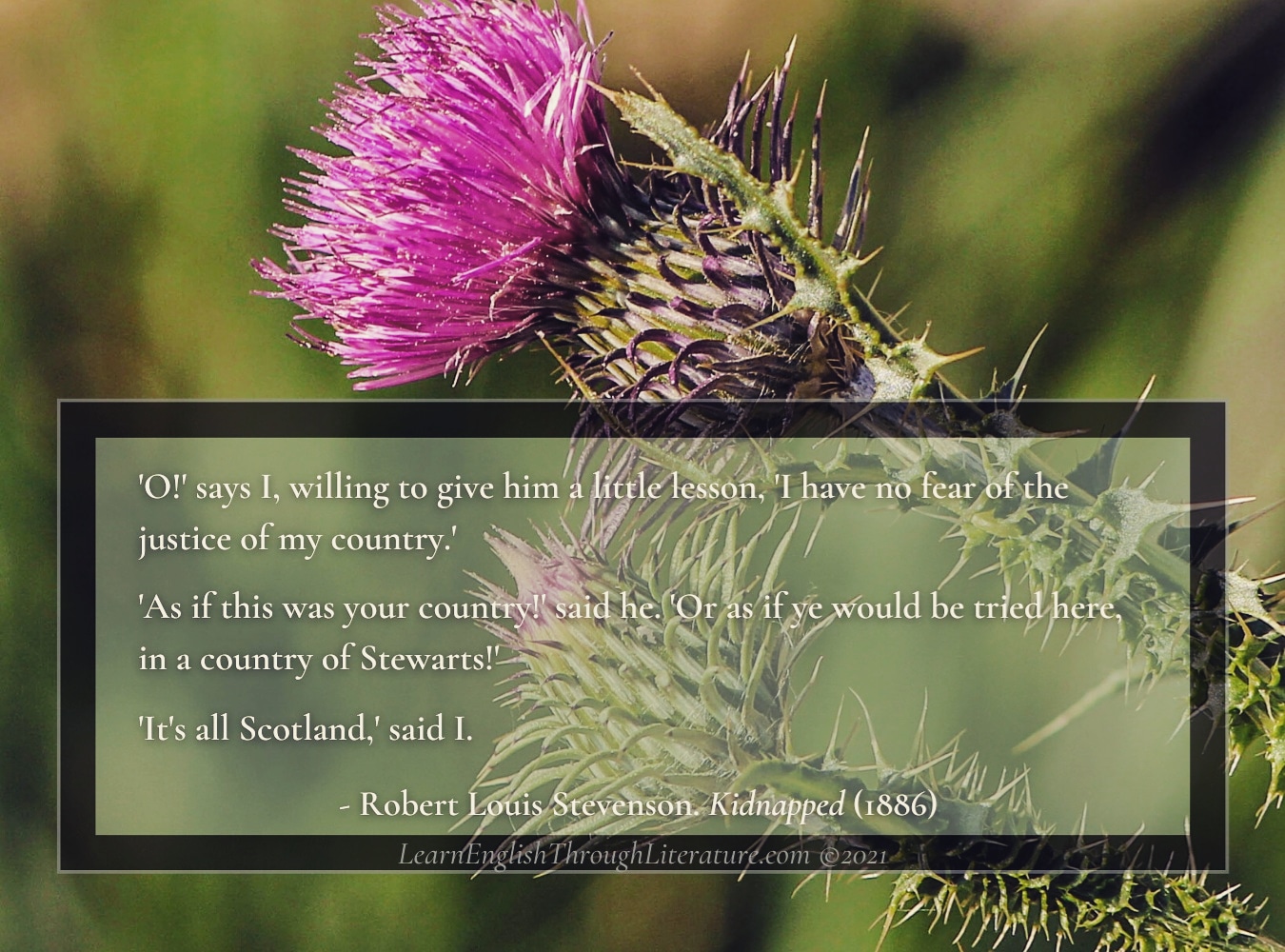 📗 ‘O!’ says I, willing to give him a little lesson, ‘I have no fear of the justice of my country.’

‘As if this was your country!’ said he. ‘Or as if ye would be tried here, in a country of Stewarts!’

We are approaching the time of year when Scotland celebrates its culture – that is, on Robert Burns’ Day, usually around the date of Burn’s birth, January 25th (born in 1759). More on Robert Burns himself, Scotland’s beloved poet, to come at the weekend – watch this space!

I thought it would be nice to share some excerpts (short passages taken from a longer one) from some of the great Scottish classics.

One of my favourite books as a teenager was Robert Louis Stevenson’s Kidnapped, whose hero, through an unexpected adventure, ends up travelling by foot and by sea all around Scotland, learning more about the native clans and traditions as he goes.

Today’s lesson therefore will be a reading comprehension one, provided with vocabulary lists and explanations of unusual phrases to help you better appreciate Stevenson’s best writing.

Kidnapped is a historical fiction novel set around the years 1751-1752, in the years following the Jacobite rising of 1745. The grandson of James II of England, Scotland, and Ireland – Charles Edward Stuart – was involved in a rebellion aimed at restoring his father, James II’s son, to the British throne.

📝 The story is about a young man called David Balfour; on a short journey to learn more about his inheritance, he is kidnapped, taken across Scotland, and finds himself caught up in the dangerous events surrounding the Jacobite cause.

Kidnapped gives us a broad picture of what life was like for many Scots in that period.

📗 Alan and I were put across Loch Errocht under cloud of night, and went down its eastern shore to another hiding-place near the head of Loch Rannoch, whither we were led by one of the gillies from the Cage. This fellow carried all our luggage and Alan’s great-coat in the bargain, trotting along under the burthen, far less than the half of which used to weigh me to the ground, like a stout hill pony with a feather; yet he was a man that, in plain contest, I could have broken on my knee. Doubtless it was a great relief to walk disencumbered; and perhaps without that relief, and the consequent sense of liberty and lightness, I could not have walked at all. I was but new risen from a bed of sickness; and there was nothing in the state of our affairs to hearten me for much exertion; travelling, as we did, over the most dismal deserts in Scotland, under a cloudy heaven, and with divided hearts among the travellers.

📝 In this section, we see David Balfour and his companion Alan Breck being guided along some difficult terrain (land). They begin by crossing a lake (often called ‘Loch‘, which is the Scottish Gaelic word for ‘lake’), and are supported on their journey by a helpful guide, a gillie, from one of the local clans.

* ‘put across Loch Errocht’: they were put in a boat that sailed across the lake

* ‘under cloud of night’: under the dark cover of night, under darkness

* ‘head of Loch Rannoch’: the ‘head’ here refers to the edge of a lake (or inlet) by which a river enters

* ‘gillie’: (Scotland) a man or boy who assists or attends another person on a hunting or fishing expedition

* ‘trotting’: from the verb, ‘to trot’, meaning to walk along quickly; often used to describe the quick pace of a horse

* ‘burthen’: [an alternative and more unusual spelling of] burden

* ‘stout’: (describing a body) of a heavy or sturdy build; strong and well-built

* ‘disencumbered’: not burdened (or cumbered) with a load; free from having to carry something heavy and unwanted

* ‘I was but new risen from a bed of sickness’: I had just recently recovered from being sick

* ‘hearten’: give courage or strength to do or face a difficult task

* ‘deserts’: lands that are flat, dry, and monotonous for miles around. Usuually deserts refers to the sandy plains in places like the Sahara, northern Africa, but here they simply mean the endlessly flat and desolate boglands of this part of Scotland.

📝 David finally makes it to the house of the lawyer who can tell him more about his inheritance and the legal conditions surrounding it. He begins the interview by telling his story …

📗 Thereupon I told him my story from the first, he listening with his spectacles thrust up and his eyes closed, so that I sometimes feared he was asleep. But no such matter! he heard every word (as I found afterward) with such quickness of hearing and precision of memory as often surprised me. Even strange outlandish Gaelic names, heard for that time only, he remembered and would remind me of, years after. Yet when I called Alan Breck in full, we had an odd scene. The name of Alan had of course rung through Scotland, with the news of the Appin murder and the offer of the reward; and it had no sooner escaped me than the lawyer moved in his seat and opened his eyes.

* ‘thereupon’: this is a nice elegant word to say ‘shortly after that’

* ‘precision’: the quality of being exact, clear, precise

* ‘heard for that time only’: heard once, at that particular time only

* ‘years after’: for a long time after

* ‘I called Alan Breck in full’: when I recalled the part, role, or story of Alan Breck from beginning to end

* ‘rung through Scotland’: the sound of [Alan’s name] had been heard by people all over Scotland

📗 ‘Well, well,’ said the lawyer, when I had quite done, ‘this is a great epic, a great Odyssey of yours. You must tell it, sir, in a sound Latinity when your scholarship is riper; or in English if you please, though for my part I prefer the stronger tongue. You have rolled much; quae regio in terris—what parish in Scotland (to make a homely translation) has not been filled with your wanderings? You have shown, besides, a singular aptitude for getting into false positions; and, yes, upon the whole, for behaving well in them. This Mr. Thomson seems to me a gentleman of some choice qualities, though perhaps a trifle bloody-minded. It would please me none the worse, if (with all his merits) he were soused in the North Sea, for the man, Mr. David, is a sore embarrassment. But you are doubtless quite right to adhere to him; indubitably, he adhered to you. It comes—we may say—he was your true companion; nor less paribus curis vestigia figit, for I dare say you would both take an orra thought upon the gallows. Well, well, these days are fortunately by; and I think (speaking humanly) that you are near the end of your troubles.’

* ‘epic’: a long, classical story with a lot of adventures, often told in a poetic form

* ‘Odyssey’: referring to the epic Greek poem, Homer’s ‘The Odyssey’

* ‘You have rolled much’: (a regional expression) you have travelled much, far

* ‘parish’: an administrative region, usually small, that has its own church and priest

* ‘homely’: humble, made at home, and not sophisticated or complicated

* ‘getting into false positions’: getting yourself into difficult or risky positions that require you to pretend to be someone else in order to stay safe

* ‘a trifle’: This is used quite often in regional Englishes throughout the British Isles: it means ‘a little bit’

* ‘bloody-minded’: pugnacious, liking to fight or be violent

* ‘none the worse’: not harmed or damaged (by something)

* ‘merits’: good or valuable qualities, or deserving traits of character

* ‘soused’: literally ‘drenched in water, made very wet by being soaked’. Here though it means ‘drowned in the North Sea’.

* ‘adhere’: stick to someone or something faithfully or closely

* ‘indubitably’: without a doubt, surely

* ‘an orra thought upon the gallows’: another thought before doing something wrong or risky that would result in punishment by death. In writing ‘orra’, Stevenson is trying to capture the Scottish pronunciation of the word ‘another’.

👉 These three excerpts should provide you with a taste of what Stevenson’s book and writing style is like. Perhaps you have read them and thought that they were more than just a taste, rather an appetiser to try and read more! I hope so, and as always remember that there are other versions of the story, including audiobooks and sometimes documentaries or films to help you see the tale from another perspective and learn more English along the way.

Approach your English reading as an adventure in itself, and like David Balfour in this story, you will pick up many valuable words, phrases, and cultural ‘nuggets’ along the way!