Lesson #160: ‘The sand stirred and spun and scattered …’: Alliteration and Assonance in Everyday English 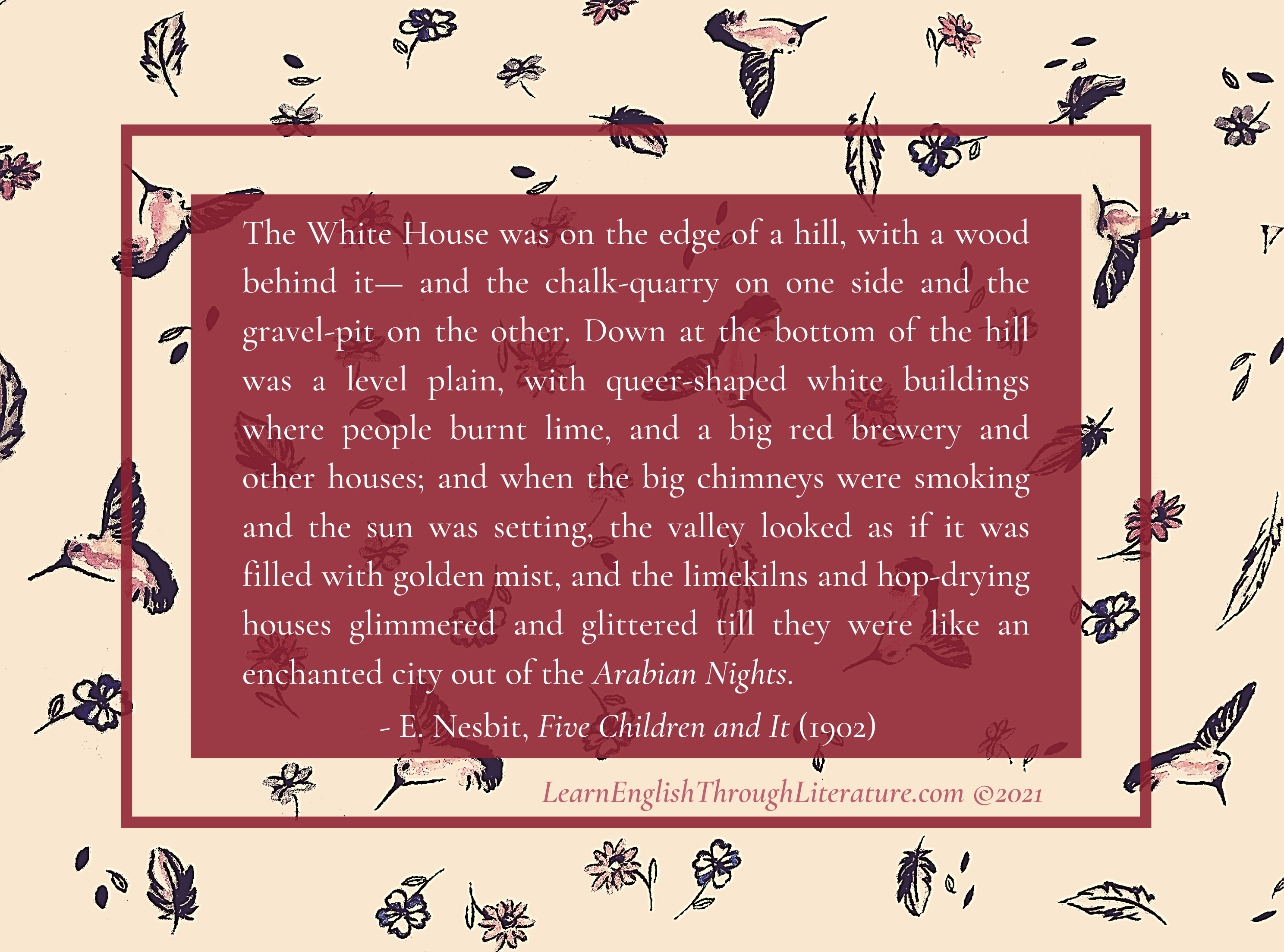 📙 The White House was on the edge of a hill, with a wood behind it— and the chalk-quarry on one side and the gravel-pit on the other. Down at the bottom of the hill was a level plain, with queer-shaped white buildings where people burnt lime, and a big red brewery and other houses; and when the big chimneys were smoking and the sun was setting, the valley looked as if it was filled with golden mist, and the limekilns and hop-drying houses glimmered and glittered till they were like an enchanted city out of the Arabian Nights.

I can still remember some of the tongue-twisters that as children we used to enjoy reciting as quickly as we could:

Apart from the childish competitiveness we enjoyed from these tongue-twisters, these silly sayings have a linguistic value of their own. This is because they demonstrate alliteration, which is the repeated occurence of a particular letter or sound at the beginning of adjacent (close by) words.

They also include assonance, which is the repetition of certain sounds found between syllables of neighbouring words.

In the first tongue-twister above, the letter ‘p’ is alliterative, while in the second tongue-twister, the repeating sound ‘oo[d]’ found in the words ‘wood’, ‘would’, ‘woodchuck’ is an example of assonance.

👉 You will find both alliteration and assonance in tongue-twisters and many poems in English.

English speakers tend to like alliteration and assonance, and will often use short alliterative phrases in their speech, especially when speeches are persuasive, professional, or formal. A few pertinent (suitable) alliterative words in an academic essay are often appreciated, especially when used to make a decisive or memorable point. Here is a concluding line from professional historian Caitriona Clear’s excellent academic study:

‘While the records can tell us something of public health, certain aspects of the people’s health will remain hidden.’

However, our examples of alliteration and assonance today will be drawn from a lighter text, Edith Nesbit’s classic children’s book, Five Children And It. Consider the final section of the sentence quoted above:

📙 ‘… and when the big chimneys were smoking and the sun was setting, the valley looked as if it was filled with golden mist, and the limekilns and hop-drying houses glimmered and glittered till they were like an enchanted city out of the Arabian Nights.’

– E. Nesbit, Five Children and It

Can you find examples of alliteration or assonance here?

✏️ Firstly, there is the alliterative ‘s’ of ‘smoking’, ‘sun’, ‘setting’. Then there is also the general assonance of ‘in’ sounds in ‘chimneys’, ‘smoking’, and ‘setting’.

✏️ Then in ‘glimmered’ and ‘glittered’ we see the allieration of ‘g’, but also the assonance of ‘l’ sounds within these words: ‘glimmered’, ‘glittered’ .

Here are a few more sentences taken from the same classic, and now it is your turn to identify them!

✍️ Usually we look for more than two words with a similar consonant or sound to qualify as alliteration or assonance. These instances are often specifically chosen by the author or speaker, rather than simply being chance co-occurences (like ‘g’ at the beginning of ‘glorious’ and ‘garden’ below – both these words happen to start with the same letter, but this has not been an intentional alliteration).

(I have included answers at the end of this lesson if you want to compare what you find to mine.)

📙 1) ‘Mother … seemed to wish to see the boxes carried in, and even to pay the driver, instead of joining in that first glorious rush round the garden and the orchard and the thorny, thistly, briery, brambly wilderness beyond the broken gate and the dry fountain at the side of the house.’
– E. Nesbit, Five Children And It

📙 2) ‘The children had explored the gardens and the outhouses thoroughly before they were caught and cleaned for tea …’
– E. Nesbit, Five Children And It

📙 3) “Fancy it having been wet sea here once, all sloppy and shiny,’ said Jane … ‘And masts of ships and wrecked Spanish treasure. I wish we could find a gold doubloon, or something,’ Cyril said.’
– E. Nesbit, Five Children And It

📙 4) ‘ … and the cave party were just making up their minds that sand makes you thirstier when it is not by the seaside, and someone had suggested going home for lemonade, when Anthea suddenly screamed.’
– E. Nesbit, Five Children And It

Indeed if you are interested in finding more examples of alliteration and assonance in literature, why not read Five Children And It for yourself? E. Nesbit loved to sprinkle her writing with instances of both, and she did this in a manner that sounds as naturally English as it is interesting!

Hopefully this lesson has shown how alliteration and assonance are not only part of ‘children’s play’ like tongue-twisters, or even of advanced stylistics like academic or poetic language, but also ‘part and parcel’ of everyday English!