Lesson #155: Tenses to Tell Stories With: The Past Progressive, Simple Past, and Past Perfect Continuous 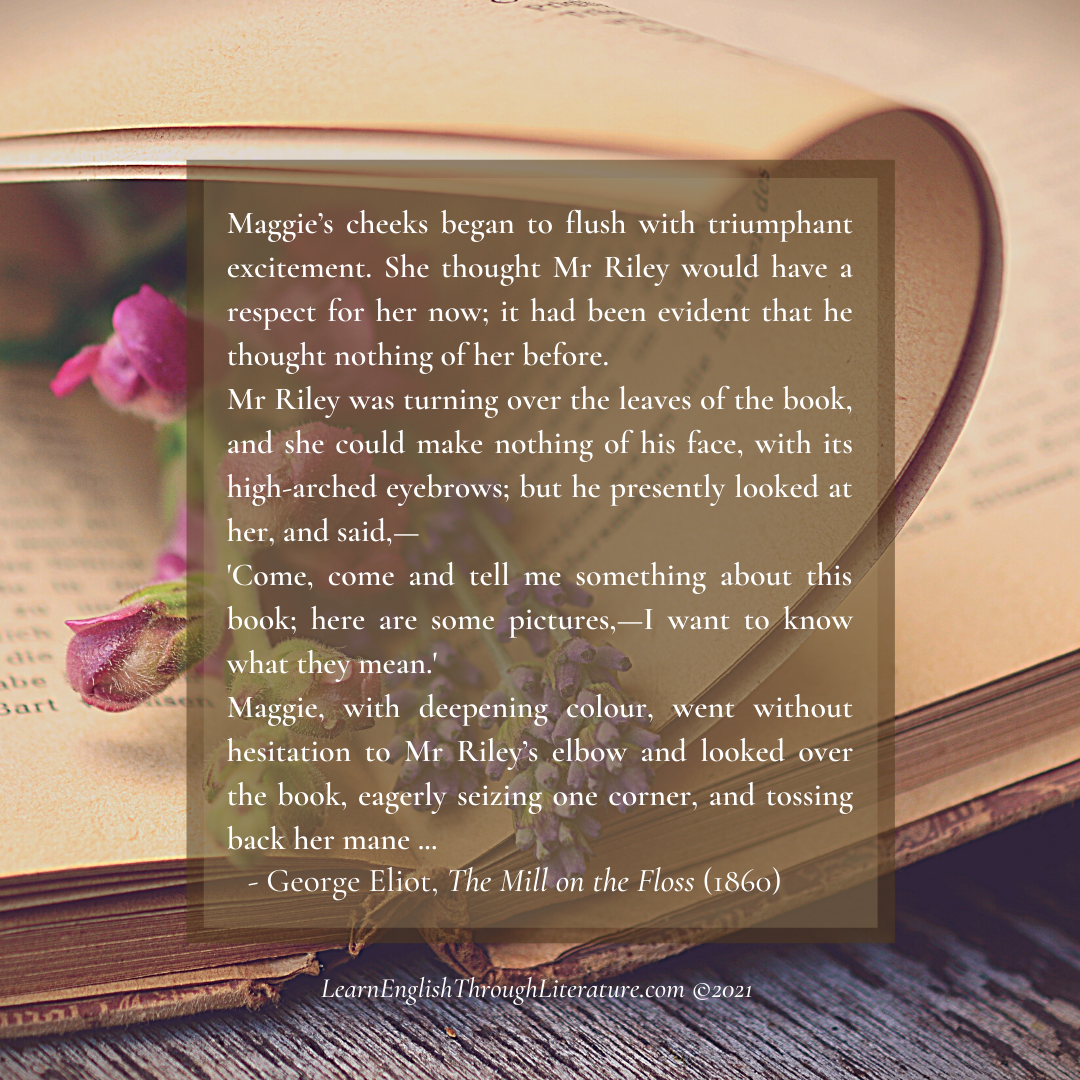 If you have ever read books set in Victorian Britain, you may have noticed that women were generally discouraged from reading any books that might cause them to become intellectual. While novels, magazines, and some plays were considered acceptable for them to read, they were discouraged from reading works of science, philosophy, theology, or the law. 📚

I have chosen this short piece from George Eliot’s classic, The Mill on the Floss (1860), where the little girl Maggie overhears her father and a schoolmaster discuss her brother’s studies. The schoolmaster, Mr Riley, does not approve of girls like Maggie wanting to study anything academic. On the other hand, Maggie’s father Mr Tulliver mentions his daughter’s love of reading with some pride:

📙 Maggie’s cheeks began to flush with triumphant excitement. She thought Mr Riley would have a respect for her now; it had been evident that he thought nothing of her before.

Mr Riley was turning over the leaves of the book, and she could make nothing of his face, with its high-arched eyebrows; but he presently looked at her, and said,—

‘Come, come and tell me something about this book; here are some pictures,—I want to know what they mean.’

Maggie, with deepening colour, went without hesitation to Mr Riley’s elbow and looked over the book, eagerly seizing one corner, and tossing back her mane …

🖋️ When we retell a story in English, we often use various forms of past tenses within the same sentence or paragraph. When used correctly, these allow the narrative to sound believable and interesting. However, when used incorrectly, these same past tense forms will cause confusion.

It is important therefore to understand the main types of past tense forms and the function they can have in a sentence.

In the above text we have only a few instances of the past progressive, partly because the scene described is that of a visit (Mr Riley visiting the Tulliver family), so it is an event rather than a habitual action or behaviour.

The past progressive tense describes an action or state of being that was continuous over a period of time (sometimes even into the present time – e.g. ‘I was studying for my exams’, which could mean that the studying continues even now).

📙 ‘Mr Riley was turning over the leaves of the book …’

– George Eliot, The Mill on the Floss

This is the most common past tense form in the quoted text. Can you find some examples of it? The simple past describes an action that is completed in the past, like the following:

📙 ‘She thought Mr Riley would have a respect for her now …’

📙 ‘but he presently looked at her, and said,’

📙 ‘Maggie, with deepening colour, went without hesitation to Mr Riley’s elbow and looked over the book …’

–  George Eliot, The Mill on the Floss

It is formed by using ‘had been’ + the verb’s present participle (e.g. ‘thinking’)

📙 ‘… it had been evident that he thought nothing of her before …’

–  George Eliot, The Mill on the Floss

This is not an example of the past perfect continuous because ‘evident’ is not a verbal present particple. It is simply a past perfect: ‘had been’ + adjective.

But if we wanted to rephrase this sentence from the quoted passage into the past perfect continuous tense (which is very common in storytelling), we could write it as follows:

He had been thinking very little of her before …

📝 Notice how we need to rearrange the words in the phrase to do this, partly because the past perfect continuous requires an active subject to perform the action, in a way that the past perfect alone (being a passive observation of a past action) does not.

One last observation on the use of tenses in storytelling:

You will notice that Mr Riley’s speech is in the simple present tense (‘here are’, ‘I want’, ‘they mean’) or in the imperative forms (‘come and tell me’). This is because although George Eliot was describing a visit that had taken place in the past, Mr Riley was speaking and acting in his present – hense the simple present tense and the imperative.

✍️ When you are retelling a story, remember to conjugate verbs in the tense that suits the subject’s action (whether that is the narrator, who is describing something in the past – or else a character within the story, who is most likely acting in their own present tense).

This lesson has covered the three main past tense forms that are used in storytelling. I hope that you are now able not only to comprehend them when you encounter them in a written text (like a novel), but also to use them correctly in your own speech whenever you tell a story of your own.