Lesson #139: Mini-Lesson Monday (Part 2): All About The Unmissable Conjunction ‘And’ 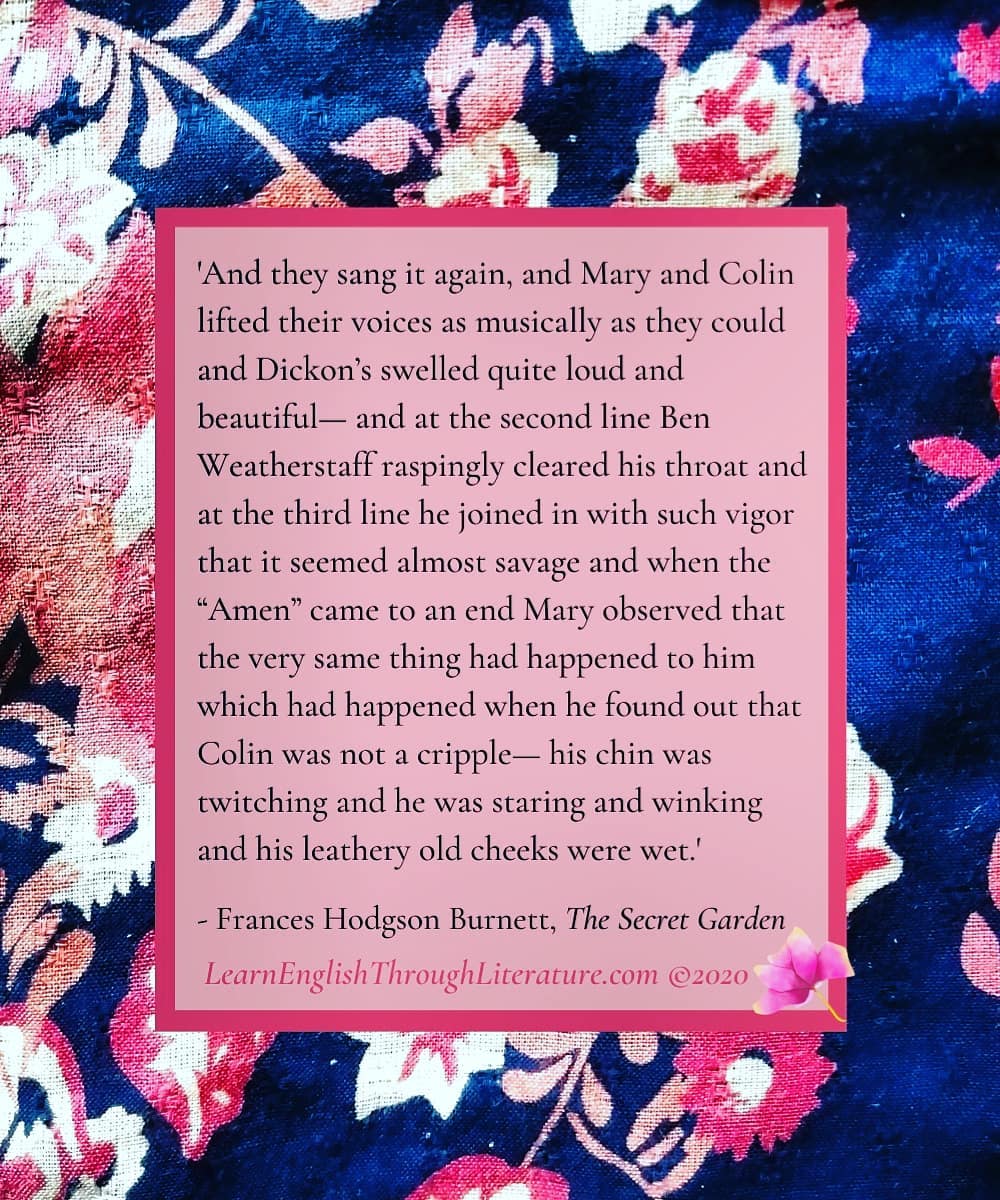 These were the words of a lovely 5-year-old girl called Lois I met several years ago. I still remember her excited face looking up at me as she shared some of her ‘favourite things’.

I was reminded recently of Lois’ enthusiasm when I read this run-on sentence (defined below) in Frances Hodgson Burnett’s children’s book, The Secret Garden (1911):

📗 “It’s cool and warm and sweet all at the same time.”

What do both sentences above have in common?

📝 They are ‘run-on sentences’: they have several clauses tied together with many instances of ‘and’ sprinkled throughout. They are not grammatically correct (as discussed in the last lesson post). Indeed you may have already heard one of the most common criticisms of poor writing in English: ‘It had run-on sentences.’

So why did Frances Hodgson Burnett include run-on sentences in her writing? Her book, which tells the story of lonely children discovering happiness in planting a secret garden, is full of them:

📗 “You smell like flowers and— and fresh things,” he cried out quite joyously.

“What is it you smell of? It’s cool and warm and sweet all at the same time.”

📗 “It’s the Magic and— and Mrs. Sowerby’s buns and milk and things,” said Colin.

While run-on sentences are grammatically incorrect and to be avoided in your writing, you may hear an excited person using such sentences in spoken English when they are eagerly talking about several things all at once.

Children especially like to use run-on sentences, and since Frances Hodgson Burnett wanted to capture the excitability of young children, she included several in her book. These are especially memorable when someone reads the book aloud – you can almost hear Colin breathlessly pause at the dash (-) as he tries hurriedly to say all he can think of: ‘It’s the Magic and – and Mrs. Sowerby’s buns and milks and things …’

STARTING SENTENCES WITH ‘AND’ – IS IT RECOMMENDED?

There was once a time when all English language learners were discouraged from beginning their sentences with a conjunction like ‘And’. However, in recent years it has become so common that it is no longer treated as a mistake.

✍️ That said, I would not really recommend starting your sentences with a conjunction if you can help it. However, if you do find that you have a very long sentence that should be divided in two, and that your second sentence would make an effective point if it started with a conjunction, then do use it! It tends to make your writing more emphatic, which is why it is good to use it selectively.

📗 “I like them round,” said Mary. “And they are exactly the color of the sky over the moor.”

📗 ‘And they both began to laugh over nothings as children will when they are happy together.’

This last point is more of a descriptive writing point than a grammatical one, but as Frances Hodgson Burnett used it so persuasively in her book, I would like to share it here too.

As we have mentioned before, ‘and’ joins words, phrases, or clauses together; but what happens when a writer wants to describe several things happening suddenly and simultaneously, when each action or change forms a clause of its own?

In such instances, a writer might include a long run-on sentence for dramatic effect. Frances Hodgson Burnett uses it in fact to describe the climax of the story taking place: it all happens in one memorable moment, when some children and an elderly gardener join in chorus, celebrating the recreation of their secret garden.

📗 ‘And they sang it again, and Mary and Colin lifted their voices as musically as they could and Dickon’s swelled quite loud and beautiful— and at the second line Ben Weatherstaff raspingly cleared his throat and at the third line he joined in with such vigor that it seemed almost savage and when the “Amen” came to an end Mary observed that the very same thing had happened to him which had happened when he found out that Colin was not a cripple— his chin was twitching and he was staring and winking and his leathery old cheeks were wet.’

In this excerpt we see the two types of ‘and’ mentioned before in our last lesson post: the ‘and’ that joins clauses, and the ‘and’ that joins words that are a kind of pair in themselves (‘Mary and Colin’, ‘loud and beautiful’, ‘staring and winking’). 👉 Notice how each ‘and’ in this quotation, especially the ones joining clauses together, raise the level of excitement: one thing is happening after another thing, suddenly and quickly.

A good reader will appreciate how Frances Hodgson Burnett dramatically paced this sentence. A good narrator will be able to express this excitement and energy when they read it aloud too. And I hope that these lessons have, in their own way, encouraged you to read books like hers with a new eye – ready to enjoy the pacing, the ‘packaging’ of clauses, and poetry that the little ‘and’ can offer!